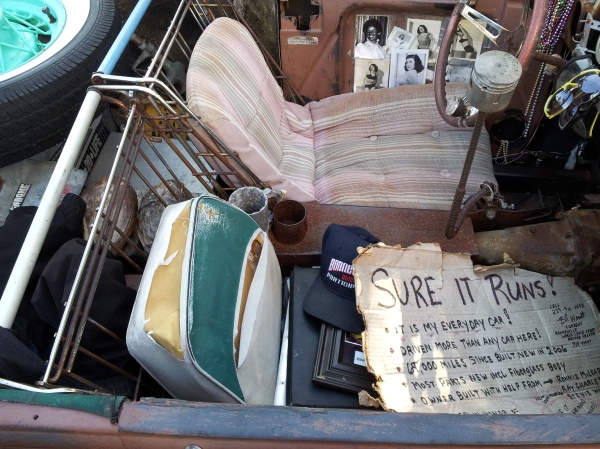 No one would steal his car on the streets of Tijuana.  It made the search so much easier.  He wondered what one of them would say, when finally found – the girls whose pictures he tucked in the door.  He flicked his thumb around the edges of the latest addition.  A girl called Rita.  No parents, no friends to miss her.

He’d been a California detective for thirty years.  Each one of the faces on his left had disappeared on his watch.  It was another day off, and another day following the trail.

I first thought of Tijuana, Mexico when looking at this photo because of the experience my parents had when visiting a health clinic there.  Needing a ride over the border from San Diego, they got a “taxi” that was anything but shiny and yellow (although not as bad as this!).  The driver explained that his car was specifically for this purpose, as any nicer vehicles soon lost their hubcaps, radios, and anything else that could be appropriated.

Many thanks to Rochelle Wisoff-Fields for hosting the Friday Fictioneers!  Each Friday brings a new photo prompt and the challenge to write a story in just 100 words.  Follow the group on FaceBook or via Twitter – #FridayFictioneers.  Please visit more Fictioneers for some Friday Flash fun!

“Sing a song of sixpence, a pocketful of rye…Four and twenty blackbirds baked in a pie…” The childish notes pierced up to the top of his branches.

Why was the world so violent against his kind?  Or was it his color?  His maligned black brethren were forever croaking “Nevermore”, and to be taunted by this lonely girl was really too much.

The wolf was right.  This was their woods.  They should work together to keep it free from oppression.

Her red cape was so easy to pick out on the ground.  Even easier once she was stilled.

Flash fiction is not only fun, it’s become a forcible genre all on its own.  Lee Strickland, writer and lecturer, comments on the ever-pressing need for “sentences that command attention”.  Or, as flash fiction rock star Ravi Mangla puts it, “dynamic sentences that can rise above the noise.”

How did one writer rise above the noise on Twitter?  She dribbled her 8,500 word story “Black Box” out for one hour a night, for ten nights in a row.  Jennifer Egan’s story has now been printed in New Yorker‘s Science Fiction Magazine, complete with the 140-character tweets separated graphically on the page.  And as Strickland says, “You taste the work sentence by sentence.”  That certainly gives writers pause to assess the worth, weight, and value of each sentence in a piece, and cut accordingly!

“No, dear.”  She drew the oven mitts over her hands.

“No, dear.”  She placed the flaky-crusted pan before him.

“Mmmm.  No.”  She pressed the knife into the flesh of the pie, smiling as it exhaled.

“I couldn’t say.  You’ll just have to taste it for yourself.”  She passed the plate to his waiting hands.

“No, darling.  It’s a different kind of pie altogether.”  She patted the glass vial outlined in her pocket.

“Hmmm?  Oh, no thank you, I won’t be having any today.”  She leaned back in the chair and closed her eyes.

Flash fiction – AKA postcard fiction, micro fiction, or short-shorts – is making waves around the world.  The Irish Times interviewed current writers of the trendy genre:

“I definitely think Web 2.0, especially blogs and online magazines, have facilitated the growth of the flash fiction,” says author Rob Kitchin, who specialises in the “drabble”, a short story of exactly 100 words. “In some ways, though, the rise says more about how the internet is affecting writers than readers.”

But readers are loving the “bite-sized” pieces that can be read on hand-held devices, ” consumed on a train or bus ride or in the small pockets of time that people have within their day,”  says Alison Wells.

Writers are making good use of their tiny writing samples, too.  The article reports “…(John) McFetridge also employs a collection of flash fiction as a calling card, giving away a sample of his work to readers for free via digital download. Rob Kitchin has already benefited from offering his flash fictions for free online.

“It can be a very good way of getting noticed,” he says. “The most obvious example is Stuart Neville, whose agent discovered him via a short story in [online magazine] Thuglit. I also hooked up with my agent through a flash fiction challenge, where the agent was a judge. In both cases we were asked if we had any full-length pieces they could take a look at.”

But is flash fiction sustainable beyond the web and the fun of writer’s groups online?  Some smaller presses are looking at short fiction and its life via e-books.  McFetridge continues, “For authors, I also see the potential for flash fiction to develop somewhat similarly to the music industry, where indie bands such as the Arctic Monkeys made their name through initially free downloads.”

He also identifies the revolution in music as pointing the way forward. “I think there’s real potential in the curator aspect of flash fiction. The marketable skill isn’t so much the writing of the flash fiction, it’s in the collecting them together in some kind of linked way – the way a good music programmer can put together a few hours of songs from a lot of different musicians, maybe not even of the same style. The distribution possibilities on smartphones make the possibility of subscription sales seem likely.'”

How would you collect your fiction fragments?  What theme would you choose, or connecting thread to link the pieces together?  Do you tend to write within a specific genre, or have a recurring style?

Leave a comment below, and don’t forget to link to your page!